Through the ages the oak has been associated with kingship. Oaks were used as meeting places for the village elders where they held their moots or tings (meetings) to decide on morals, law and

order. Decisions thus made under the watchful eye of Thor/Taranis himself were meant to endure and stand firm like the Oak tree itself. Court was held in their shade, oaths were sworn and no false word was tolerated in its presence. In many pre-Christian societies, the Oak was often associated with the leaders of the gods of thunder like Taranis and Thor. The strength and masculinity of the Oak was honored through the worship of these gods. But the oak provided also food and protection, thus also exhibiting more female qualities.

In druidic times the Oak played a particularly important role. The very name ‘Druid’ is derived from the Celtic word for Oak – ‘duir’ meaning door. Duir, door, Tür, Tor, can all be traced back to the Sanskrit root ‘DWR’, which also means ‘door’. Traditionally, doors were made of Oak, as this is the strongest and toughest wood. It is also a wood of protection and thus wards off any evil spirits.

After Llew was betrayed by Blodeuwdd, he fled wounded into the highest oak tree in the image of an eagle. It’s story is told in the mabinogion.

The Oak King rules over the summer months.

The Oak is connected with spells for protection and strength, fertility, money and success, and good fortune. 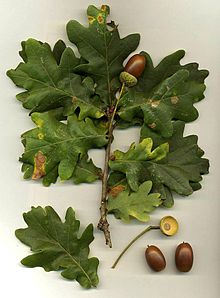 An oak is a tree or shrub in the genus Quercus of the beech family, Fagaceae. There are approximately 600 extant species of oaks. The genus is native to the Northern Hemisphere,
The oak is a common symbol of strength and endurance and has been chosen as the national tree of many countries. Already an ancient Germanic symbol (in the form of the Donar Oak, for instance), certainly since the early nineteenth century, it stands for the nation of Germany and oak branches are thus displayed on some German coins
In Greek mythology, the oak is the tree sacred to Zeus, king of the gods. In Zeus’s oracle in Dodona, Epirus, the sacred oak was the centerpiece of the precinct, and the priests would divine the pronouncements of the god by interpreting the rustling of the oak’s leaves.
In Baltic mythology, the oak is the sacred tree of Latvian Pērkons, Lithuanian Perkūnas and Prussian Perkūns.[citation needed] Pērkons is the god of thunder and one of the most important deities in the Baltic pantheon.

In Celtic polytheism, the name of the oak tree was part of the Proto-Celtic word for ‘druid’: *derwo-weyd- > *druwid- ; however, Proto-Celtic *derwo- (and *dru-) can also be adjectives for ‘strong’ and ‘firm’, so Ranko Matasovic interprets that *druwid- may mean ‘strong knowledge’. As in other Indo-European faiths, Taranus, being a Thunder God, was associated with the oak tree. Its name may derive from the Anglo-Saxon word, ac, but in Irish the word is ‘daur’, and in Welsh ‘dar’ or ‘derw’, probably cognate with the Greek, ‘drus’. Some scholars consider this the origin of the term ‘Druid’, since Druids have always been associated with sacred groves, and particularly oak forests. Dense forests of oak once covered most of Northern Europe in those days, so it is not surprising to find this tree help most sacred by people who live in oak forests, used oak timber for building, oak sticks for fuel, and oak acorns for food and fodder. Combined with the Indo-European root ‘wid’: to know, ‘Druid’ may have referred to those with ‘knowledge of the oak’, the ‘Wise Ones of the Oakwood’. The Sanskrit word, ‘Duir’, gave rise both to the word for oak and the English word ‘door’, which suggests that this tree stands as an opening into greater wisdom, perhaps an entryway into the otherworld itself.
In Norse mythology, the oak was sacred to the thunder god, Thor. Thor’s Oak was a sacred tree of the Germanic Chatti tribe. According to legend, the Christianisation of the heathen tribes by Saint Boniface was marked by the oak’s being replaced by the fir (whose triangular shape symbolizes the Trinity) as a “sacred” tree.

Thrice on my bossy shield I struck my spear;
And thrice a ghost’s shrill voice was heard in air;
The sacred oaks that skirt this sloping wood
Are dead–revive their withered roots with blood;
The blood of foes shall fertilze the plain,
and Odin’s spirt feast on heaps of slain.
Hark! now I hear his mighty voice from far–
Rise, sons of Odin, and prepare for war[42]

In the Bible, the oak tree at Shechem is the site where Jacob buries the foreign gods of his people (Gen. 35:4) . In addition, Joshua erects a stone under an oak tree as the first covenant of the Lord (Josh. 24.25–7). In Isaiah 61, the prophet refers to the Israelites as “Oaks of Righteousness”.