Folklore
In Greek mythology the aspen was a tree of heroes, whose crowns of poplar leaves gave them the power not only to visit the Underworld, but also to return safely. Similarly, the aspen crowns found in ancient burial mounds may have been included to allow the spirits of the deceased to return to be reborn. 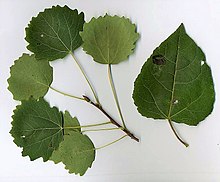 Aspen means shield and amongst the Celts its lightweight wood was indeed favoured for making shields. These shields were more than mere physical barriers between warrior and enemy; they were imbued with additional magical, protective qualities to shield the bearer from psychic as well as physical harm. The magically protective nature of the “shield tree” extended to the general population too and, like the rowan tree, was a popular choice of tree to plant close to a dwelling; buried treasures were also said to be protected by aspens.
The Latin name of the aspen is Populus tremula, the trembling poplar. Though other poplars have a similar habit of shimmering in the breeze, the aspen’s distinctive canopy of round leaves with serrated edges and pale undersides, mounted on long, laterally flattened stalks gives the tree the unique appearance of shimmering or quivering in the wind. They also make a distinctive rustling, whispering sound “. . . as if they were spattered by rain.” (R. Mabey, Flora Britannica 1996). In many cultures and religions the wind is associated with the voice of Spirit, and in the boughs and leaves of the aspen the wind finds a distinctive voice to inspire those who would listen with patience and sensitivity. The movement of the wind through the canopy and the sun dappling through the leaves can have a mesmerising effect, encouraging a contemplative and meditative frame of mind. Like the hero and shaman who stand apart from the crowd, the aspen’s sparse distribution often away from other trees. The quivering leaves helped the wind speak with the ancestors while also bearing gifts of inspiration and poetry. For these reasons the aspen was sometimes known as the whispering tree, a sacred tree to the Celts.
In the Scottish Highlands the aspen’s Gaelic name is critheann (pronounced cree-an) as in Sron a crithean in Ardgower, (the Gaelic verb for tremble being crith). Here too the aspen was considered a magical tree – an aspen leaf placed under the tongue would make the bearer more eloquent, traditionally a gift of the Faerie Queen. Furthermore several Highland folk taboos, including those against using the wood for fishing or agricultural implements, or in house construction, suggest that the aspen may have been considered a faerie tree on a par with the rowan tree which has similar taboos. Sadly, trees afforded such pagan respect often suffered a reversal of fortune in Christian mythology. Thus, all things Faerie became evil and the poor shimmering aspen tree was said to tremble in shame for having supplied the wood from which the Crucifixion Cross was made (though elsewhere both holly and oak also suffered this accusation), thereby debasing the qualities of this beautiful tree to those of fear and loathing.

Aspen wood is very lightweight when dried, becoming very buoyant and was therefore a popular choice for oars and paddles. Aspen wood does not burn easily.
In folklore the tree is often used as a metaphor for impending death.

Divination
Conquer your fear. This tree is your shield and gives us the ability to endure and conquer our problems, doubts and self-confidence issues. Fear is not to be feared – but rather recognized as the opportunity to embrace our shadow selves and grow. This is the energy of the spiritual warrior. Aspen learns us the setting of boundaries. To truly know yourself and your capabilities. It teaches us just how far we can bend without breaking. It is closely associated with speech, language, kinship, communication and dispelling fear. Trust your inner voice for courage and strength.

Background
Populus tremula commonly called aspen. The English name Waverly, meaning “quaking aspen. It is a substantial deciduous tree growing to 20 m tall by 10 m broad, with a trunk up to 1 m in diameter. Like other aspens, it spreads extensively by root sprouts, which may be produced up to 40 m from the parent tree, forming extensive clonal colonies.