The alder is a member of the birch family generally found near streams, rivers, lakes and wetlands. It is known for creating a fertile, lush environment for surrounding animal and plant life. Some

believe the alder tree to be symbolic of a balance between female and male principles since it possesses both female and male catkins on the same branch. In Irish mythology the first human man was made from the alder tree. Alder is also used for shields and bridges. In the book of Ballymote, Alder is described as the wood from which life saving shield are to be made.Used in fires to make swords. Frees the Earth from water. Used in Building Foundations because of this fire aspect. Protection in conflicts. Freedom from binding Magick.

Alder is the symbol of Bran in Celtic mythology. In The Mabinogion, Bran laid himself across a river as a bridge so that others might cross – likewise, the Alder bridges that magical space between earth and the heavens. It is also associated with oracular powers – Bran’s head was an oracle in legend.

Traditional witches use Alder wood flute and whistles to invoke the Sun God at the solstices and equinoxes.

Protection. Bridge. Connection between the worlds.

Alder is the common name of a genus of flowering plants (Alnus) belonging to the birch family Betulaceae. The genus comprises about 30 species of monoecious trees and shrubs, a few reaching a large size, distributed throughout the north temperate zone with a few species extending into Central America and the northern Andes. 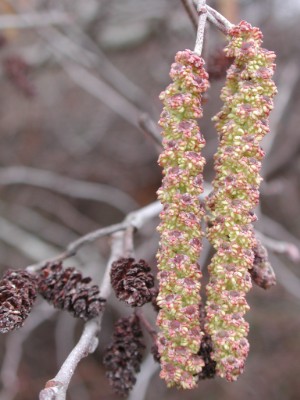 With a few exceptions, alders are deciduous, and the leaves are alternate, simple, and serrated. The flowers are catkins with elongate male catkins on the same plant as shorter female catkins, often before leaves appear; they are mainly wind-pollinated, but also visited by bees to a small extent. These trees differ from the birches (Betula, the other genus in the family) in that the female catkins are woody and do not disintegrate at maturity, opening to release the seeds in a similar manner to many conifer cones.
The largest species are red alder (A. rubra) on the west coast of North America, and black alder (A. glutinosa), native to most of Europe and widely introduced elsewhere, both reaching over 30 m. By contrast, the widespread Alnus viridis (green alder) is rarely more than a 5-m-tall shrub.
The catkins of some alder species have a degree of edibility, and may be rich in protein. Reported to have a bitter and unpleasant taste, they are more useful for survival purposes. The wood of certain alder species is often used to smoke various food items such as coffee, salmon and other seafood.
Alders are often found in swampy, boggy areas, and conveniently, their wood doesn’t rot when it gets wet. In fact, if left to soak in water, it becomes hardened. This came in handy when early Britons were building strongholds in bogs. As a hardwood, alder is used in making furniture, cabinets, and other woodworking products. Alder bark and wood (like oak and sweet chestnut) contain tannin and are traditionally used to tan leather. A red dye can also be extracted from the outer bark, and a yellow dye from the inner bark.