And again there is a rune with 2 possible trees attached. IPIN can either mean pine or gooseberry. Pine is already used for another rune, so we are left with gooseberry.

Gooseberries are also associated with a wide range of meanings. Often, when British children ask where babies come from, they are told that they can be found “under a gooseberry bush.” This agrees with the Victorian flower meaning of the blossom: anticipation. Also some state gooseberry was a slang word for female 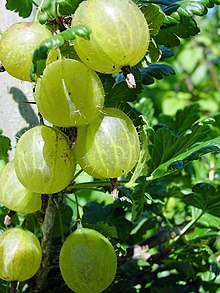 pubic hair.
Many phrases have developed over the years which mention gooseberries. In the newspaper business the phrase “great gooseberry season” is used to describe a period where there isn’t much headline news so tales such as the largest gooseberry are
published instead. The phrase “playing gooseberry” signifies the third person and possible chaperone of a group where the other two people are dating. The phrase “going gooseberrying” involves stealing clothes that are hanging to dry.

Finding myths connected to gooseberry is difficult. In literature most writer guess to what its connection is, or leave the rune out. The associations are: divine influence, sweetness of life, the kindred (also the ones in nature)

Divination
That which is tasteful and the divine influence which surrounds us in the sweetest way. And fruitful generations and connection to nature and the other world.

The gooseberry is a straggling bush growing to 1.5 metres in height and width, the branches being thickly set with sharp spines, standing out singly or in diverging tufts of two or three from the bases of the short spurs or lateral leaf shoots.