The willow is associated with the female force in the universe. Make contact with this tree to connect to emotions, feeling, sensitivity, vision, intuition and divination. Because the tree grows

near/in water it is strongly connected to water and with it branches up in the ait to the moon. Thus there is a strong connection to the otherworld. Wickerman were also made out of willow branches.
Harps were made out of the wood, connecting it with bards who sang of old times. And druids used dream work near willow groves to do oracular work.
Because willow grow on the banks of rivers, near streams and wetlands, and helps hold the banks together, and also is used to thatch the roofs, it is connected to shelter.

Also because the tree has an uncanning way of (re)growing and seeding itself, is is also connected to eternal life

There is a strong connection to knowledge from the other world. It is symbol is representative of divine knowledge and spiritual growth. But also to vigour and shelter.

Willows, also called sallows, and osiers, form the genus Salix found primarily on moist soils in cold and temperate regions of the Northern Hemisphere. Most species are known as willow, but 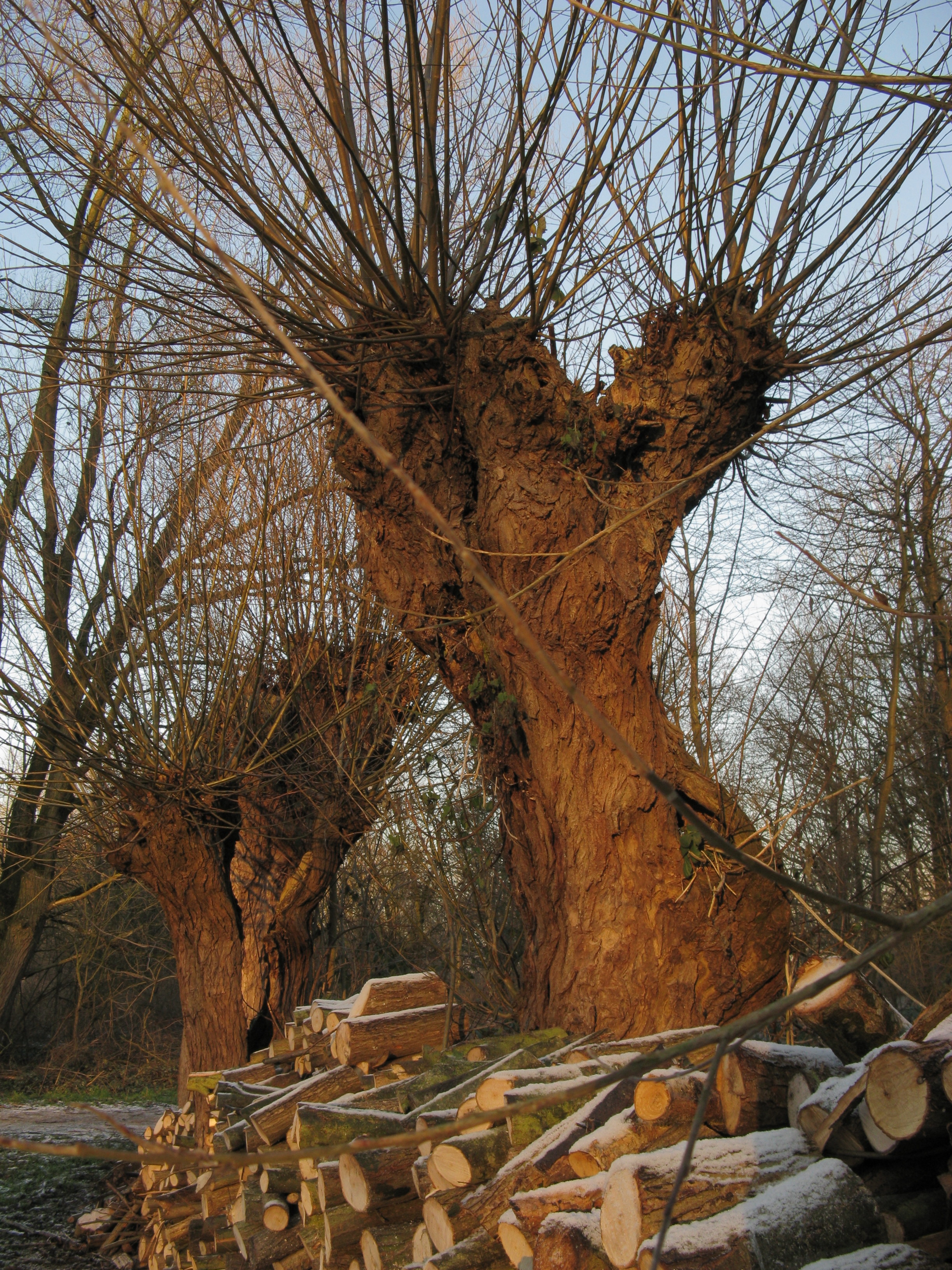 some narrow-leaved shrub species are called osier, and some broader-leaved species are referred to as sallow (from Old English sealh, related to the Latin word salix, willow). Some willows (particularly arctic and alpine species) are low-growing or creeping shrubs; for example, the dwarf willow (Salix herbacea) rarely exceeds 6 cm (2.4 in) in height, though it spreads widely across the ground.
At the base of the petiole a pair of stipules form. These may fall in spring, or last for much of the summer or even for more than one year (marcescence).
Willows all have abundant watery bark sap, which is heavily charged with salicylic acid, soft, usually pliant, tough wood, slender branches, and large, fibrous, often stoloniferous roots. The roots are remarkable for their toughness, size, and tenacity to life, and roots readily grow from aerial parts of the plant.
Medicine
The leaves and bark of the willow tree have been mentioned in ancient texts from Assyria, Sumer and Egypt as a remedy for aches and fever, and in Ancient Greece the physician Hippocrates wrote about its medicinal properties in the fifth century BC. Native Americans across the Americas relied on it as a staple of their medical treatments. It provides temporary pain relief. Salicin is metabolized into salicylic acid in the human body, and is a precursor of aspirin. In 1763, its medicinal properties were observed by the Reverend Edward Stone in England. He notified the Royal Society, which published his findings. The active extract of the bark, called salicin, was isolated to its crystalline form in 1828 by Henri Leroux, a French pharmacist, and Raffaele Piria, an Italian chemist, who then succeeded in separating out the compound in its pure state. In 1897, Felix Hoffmann created a synthetically altered version of salicin (in his case derived from the Spiraea plant), which caused less digestive upset than pure salicylic acid. The new drug, formally acetylsalicylic acid, was named Aspirin by Hoffmann’s employer Bayer AG. This gave rise to the hugely important class of drugs known as nonsteroidal anti-inflammatory drugs (NSAIDs).
Manufacturing
Some of humans’ earliest manufactured items may have been made from willow. A fishing net made from willow dates back to 8300 BC.[20] Basic crafts, such as baskets, fish traps, wattle fences and wattle and daub house walls, were often woven from osiers (rod-like willow shoots, often grown in coppices). One of the forms of Welsh coracle traditionally uses willow in the ‘lats’. Thin or split willow rods can be woven into wicker, which also has a long history. The relatively pliable willow is less likely to split while being woven than many other woods, and can be bent around sharp corners in basketry. Willow wood is also used in the manufacture of boxes, brooms, cricket bats (grown from certain strains of white willow), cradle boards, chairs and other furniture, dolls, flutes, poles, sweat lodges, toys, turnery, tool handles, veneer, wands and whistles. In addition, tannin, fibre, paper, rope and string can be produced from the wood. Willow is also used in the manufacture of double basses for backs, sides and linings, and in making splines and blocks for bass repair.
Willow is one of the “Four Species” used ritually during the Jewish holiday of Sukkot. In Buddhism, a willow branch is one of the chief attributes of Kwan Yin, the bodhisattva of compassion. Christian churches in northwestern Europe and Ukraine often used willow branches in place of palms in the ceremonies on Palm Sunday.
In China, some people carry willow branches with them on the day of their Tomb Sweeping or Qingming Festival. Willow branches are also put up on gates and/or front doors, which they believe help ward off the evil spirits that wander on Qingming. Legend states that on Qingming Festival, the ruler of the underworld allows the spirits of the dead to return to earth. Since their presence may not always be welcome, willow branches keep them away. In traditional pictures of the Goddess of Mercy Guanyin, she is often shown seated on a rock with a willow branch in a vase of water at her side. The Goddess employs this mysterious water and the branch for putting demons to flight. Taoist witches also use a small carving made from willow wood for communicating with the spirits of the dead. The image is sent to the nether world, where the disembodied spirit is deemed to enter it, and give the desired information to surviving relatives on its return.
In Japanese tradition, the willow is associated with ghosts. It is popularly supposed that a ghost will appear where a willow grows. Willow trees are also quite prevalent in folklore and myths.[29][30]
In English folklore, a willow tree is believed to be quite sinister, capable of uprooting itself and stalking travellers. The Viminal Hill, one of the Seven Hills Of Rome, derives it name from the Latin word for osier, viminia.
Hans Christian Andersen wrote a story called “Under the Willow Tree” (1853) in which children ask questions of a tree they call “willow-father”, paired with another entity called “elder-mother”.