Other names for honeysuckle include Irish vine, woodbine, fairy trumpets, honeybind, trumpet flowers, goats leaf and sweet suckle. The old name Woodbine describes the twisting, binding nature of the honeysuckle through the hedgerows. The way it grows the tree implies strength and power, once entrapped it will not let go. 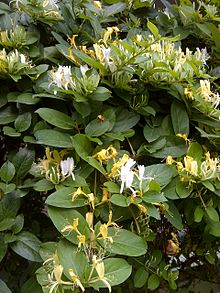 It’s believed that grown around the doors it will bring good luck. If it grows well in your garden, then you will be protected from evil. In Ireland honeysuckle was believed to have a power against bad spirits, and it was used in a drink to cure the effects of the evil eye. Bringing the flowers into the house will bring money with them.

Honeysuckle has long been a symbol of fidelity and affection. Those who wear honeysuckle flowers are said to be able to dream of their true love. Its clinging nature in the language of flowers symbolises, ‘we are united in love,’ and emphasis’s the bond of devotion and affection between two people. It was also believed that if the blooms were brought into the house then a wedding would follow within a year.

In the Victorian era there was a ban on young girls bringing honeysuckle into the home because the heady fragrance of the flowers was believed to cause dreams that were far too risqué for their sensibilities.
Some also associate it with knowledge of the afterlife and use it as a past life healing method.

Divination
Strength, fidelity, love, prosperity but also hidden lust. This rune tells you mysteries which seem to be hidden may not be as hard to delve into as you think — sometimes, you’ve just been sidetracked by distractions. It leads a way to inner secrets andand a path to self knowledge.