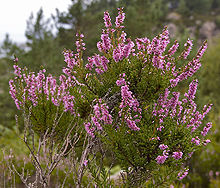 The flowering time of Heather was a time of celebration and great indulgences. They honored the fact that both beer and honey were made from the Heather. Ur is associated with the Sun Goddess, Grainne, sometimes known as the Irish Goddess Aine who is a goddess of love, summer, wealth, fertility and sovereignty.
Use the flowering shoots for stomach pains, coughs and skin disorders. Can be made into a tea to help insomnia. A tea or an Ale made from Heather is also a good general tonic and can the shoots can be crushed and used as a balm to help arthritis and rheumatism.
Honey harvested from heather aids with all the above qualities and Bee, being the designated animal, is associated with honey (the nectar of life) and wisdom. The Bees are sacred to the forest Druid. They are considered messengers of the gods. Our survival depends on them to pollinate our food.
Heather was used to make thatching, fuel, brooms, baskets and brushes and was woven into fences and walls for extra protection and strength. It makes a very strong rope as it is quite rot resistant. It also makes a great dye.

Heather is a symbolic link between mother Earth and Father Heaven. It has a strong influence on lifting the spirit and caring for others. Helps to focus passion, healing and intuition. It can be a sign that romance is in the air and that dreams are about to come to fruition. It is associated with passionate love and the keeping of secrets. (Or uncovering them). It is a gateway between the conscious self and the deep levels of the unconscious.

Description
Calluna vulgaris (known as common heather, ling, or simply heather) is the sole species in the genus Calluna in the family Ericaceae. It is a low-growing perennial shrub growing to 20 to 50 centimetres tall, or rarely to 1 metre, and is found widely in Europe and Asia Minor on acidic soils in open sunny situations and in moderate shade. It is the dominant plant in most heathland and moorland in Europe, and in some bog vegetation and acidic pine and oak woodland. It is tolerant of grazing and regenerates following occasional burning, and is often managed in nature reserves and grouse moors by sheep or cattle grazing, and also by light burning.
Referred to as Erica in all the old references, Calluna was separated from the closely related genus Erica by Richard Anthony Salisbury, who devised the generic name Calluna probably from the Greek Kallino (καλλύνω), “beautify, sweep clean”, in reference to its traditional use in besoms. The specific epithet vulgaris is Latin for ‘common’. Calluna is differentiated from Erica by its corolla and calyx each being in four parts instead of five.